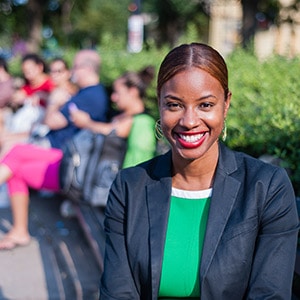 Eshauna Smith joined Urban Alliance in March 2013 and was named CEO in June 2014.  Her leadership in development, policy and advocacy, communications and strategic partnerships has helped position Urban Alliance as the premier advocacy organization for youth workforce development throughout the country.

Previously, Smith worked as a senior policy advisor in the Office of the Deputy Mayor for Education in the government of the District of Columbia.  There she led the development of Raise DC, the District’s first cradle-to-career partnership focused on improving educational and workforce development outcomes for D.C. youth from 0-24.  Prior to that Smith was the founding Executive Director of the DC Alliance of Youth Advocates (DCAYA), where she built the organizational infrastructure and established the founding member-led policy agenda.  In 2010, she received the Humanitarian Leader Spirit Award from the National Center for Children and Families for her advocacy work with DCAYA.

Smith also worked in various capacities over the past 11 years to promote the healthy development of low-income women, women of color, youth, and their families through responsible philanthropy, research and messaging, nonprofit management, and policy reform.

Weizmann Institute President Prof. Alon Chen is Breaking the MoldBy Ami Aronson of the Bernstein Family Foundation From a very young age, Prof. Alon Chen knew that he wanted to dedicate his life to science.Today, he is a renowned neuroscientist who has served as...

What is your role at your organization?   I am the Co-Founder and CEO of BeGirl. I am also the designer behind the brand, though I’m not doing much designing right now; I’m more in the management position.    Tell me more about the work of BeGirl. What...

What is your role at Building Bridges Across the River?  I am the president of the organization.  Tell me more about BBAR. What are your visions/goals for this program in the D.C. area?  Our north star—our theory of change—our desire for...

What is your role at your organization?  I am the CEO/co-founder of Democracy Works.   Tell me more about the project BFF is currently funding. What are your visions/goals for this project?  We build technology to help make it easier to vote and...

What is your role at your organization?  I am senior vice president of external affairs and diplomatic engagement, which means I am focused on three things: first, driving revenue to the organization through philanthropic partnerships; second, amplifying and...

Her Favorite Book The Bluest Eye by Toni Morrison. It was the first book I read that made me really connect with a character – it made me cry.  Her Mantra “What I do matters.” When I think about that, it reminds me that I need to be present in the moment and show...

What was your journey to becoming the Associate Director of Marshall Brennan? I have about 10 years of experience in civic education, and I’ve always been interested in teaching. I was a volunteer with an organization called the San Francisco Urban Service Project,...

What was your journey to becoming the CEO of Urban Alliance? How much time do you have? I’m just teasing. My own background is that I come from a strong family that had its share of economic challenges, among other struggles, and I grew up in a neighborhood in LA that...

What was your journey to becoming the Vice President of Planning, Development and Evaluation for Sasha Bruce? Before Sasha Bruce I had worked at a great non-profit in San Francisco called Haight Ashbury Free Clinics. In 2004 my partner and I were visiting her sister...

What was your journey to becoming the founder and executive director of Bimbam? I worked in media, advertising, and tech when I was in my 20’s, and on the side I became really excited about adult Jewish learning. Coming from a small southern city where there wasn’t a...

What was your journey to becoming the Executive Director of AU Hillel? I came to American University as an undergraduate when I was 18, and when I came to American I thought that I was going into politics- my dream at the time was to be a political speech writer....

Sixth & I has grown to become one of Washington’s most valued religious and cultural landmarks. With a non-denominational, non-traditional approach, the synagogue has welcomed thousands of people through its doors, and distinguished itself as a place of openness...

S&R Foundation embodies the embrace of ingenuity and creativity in the nation’s capital. Entering its sixteenth year, its visionary mission is to support and foster innovation among talented artists, scientists, and social entrepreneurs. S&R is in the...

Jerusalem U is yet another one of Bernstein’s grantees that is leveraging the power of innovation to inspire the new generation about Jewish and Israel identity. Poised to instill in this generation a deep sense of connection with their heritage, the organization has...

This past year, Bernstein Family Foundation was proud to provide The Creative Coalition with a grant to support its upcoming Arts Advocacy Day. Several decades ago, TCC was founded by a network of Hollywood actors determined to safeguard the arts and arts in education...

Martha’s Table has been a Washington institution for decades now, having provided its noble food, educational, and opportunity programs to thousands of children, families, and neighbors across the District. In an ever-challenging landscape for social service...

As a pioneer in the Jewish educational technology sphere, ShalomLearning is innovating Jewish supplementary instruction by introducing a fresh approach to Hebrew Congregational school. The Bernstein Family Foundation is proud to support this non-profit organization...

Bernstein Family Foundation has supported the globally-revered institution, The John F. Kennedy Center For The Performing Arts, for many years now. As a hub of the arts, culture and education, the Center has used its standing in the community to expand its reach and...

[av_textblock size='' font_color='' color=''] Bernstein Family Foundation is proud to support the Alliance for Young Writers and Artists, which is endowed with the partnership of The President’s Committee on the Arts and the Humanities (PCAH). The Alliance, PCAH, and...

Bernstein Family Foundation is a proud supporter of WAMU 88.5- American University Radio. With a listenership stretching across the greater Washington, D.C. metropolitan area, WAMU plays an important role in the nation’s capital. The Foundation, in its quest to...

Bernstein Family Foundation, a major proponent of American democracy, is proud to provide program support to iCivics, a non-profit civic education organization founded by Justice Sandra Day O’Connor. For the past year and a half, it has been in the hands of Executive...

Rabbi Aaron Miller, a rabbi at Washington Hebrew Congregation in DC and Potomac, grew up in Birmingham, Alabama. He graduated from Brandeis University with a degree in Jewish Studies and was ordained at the Hebrew Union College in Cincinnati. He also earned a Masters...